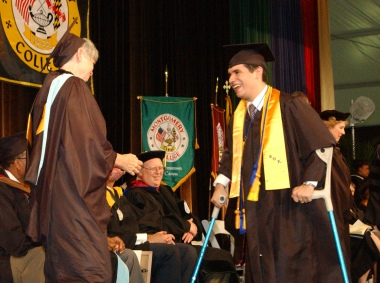 When Michael Lyons discovered his wheelchair couldn’t reach many parts of the school his daughter attended, Equip for Equality was there with help. We filed a civil rights complaint against Illinois School District 211. Under an agreement, the district was required to make the following changes:

All Jenny Youngwith wanted to do was play basketball with her high school friends.  For years her service dog, Simba, had carried the oxygen tanks she needed during games. But the Special Olympics of Illinois decided it would not allow her companion on the court. Equip for Equality filed a federal lawsuit against the Special Olympics of Illinois and the teen’s school district. Under a settlement, Jenny now plays on the team with a backpack holding her oxygen tank.

To learn more, check out these items:

High school swimmer gets to compete

Mary Kate Callahan was an accomplished swimmer who competed nationally and internationally, but because she uses a wheelchair, she was barred from meets sponsored by the Illinois High School Association. Equip for Equality and the Illinois attorney general filed a joint federal lawsuit on behalf Mary Kate and other student athletes with disabilities.  We negotiated a settlement that allowed Mary Kate to participate in the 2012-2013 swimming and track and field seasons.  The attorney general continues to represent other Illinois student athletes with disabilities who want to play high school sports.

To learn more about the case, check out these items: