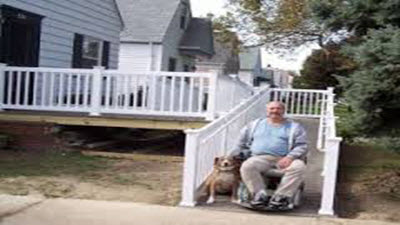 The state refused to fund a home modification for a woman with intellectual disabilities and mobility impairments. After we filed a complaint, the state approved the home modification, allowing our client to live in her home independently.

We assisted a woman with a visual impairment and asthma.  When a new management company took over her apartment, it refused to provide information in large print.  Also, her air conditioner broke often, aggravating her asthma.  We contacted the management company and explained its obligations to accommodate people with disabilities.  As a result, the company began providing all communication to our client in large print.  It also agreed to respond promptly to the air conditioning problems and even provided a second air conditioner.

We assisted a client with sarcoidosis that affected her lungs and nervous system. With one-third of a lung removed, she had reduced mobility. She applied for housing with the local housing authority, but it would not allow her to move in with her service dog because the dog was on its list of banned breeds. We conducted legal research and helped the woman submit a letter to the housing authority citing legal and medical support for the service animal. She was approved for housing and allowed to bring her service dog.

A woman with muscular dystrophy who uses a wheelchair lived in a single-family home she rented from a public housing authority. She was unable to get the grab bars and accessible shower she needed.  Our letter to the state Division of Rehabilitation Services resulted in the client getting the modifications she sought.

Our 78-year-old client owns a condominium where she lived independently until she was hospitalized in 2009 with bipolar disorder. While in a nursing home, and despite her protests, a court appointed the Office of Public Guardian (OPG) as the limited guardian of her person and estate.  She contacted us for representation to restore her rights. After a year of negotiations with OPG, a deposition of and reports by her treating psychiatrist, and several court appearances, OPG agreed to revoke the guardianship, which was approved by the probate judge.  Later, the client commented several times that she finally “felt free” and that she felt like “shackles had been removed.”