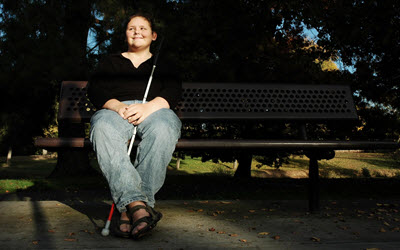 Living independently in a new apartment

EFE represented a client with an anxiety disorder who had a guardian.  The client complained that vermin in the apartment her guardian had found were making her and her three children sick.  When we investigated, we didn’t understand why the client had a guardian. Because she was managing her mental illness, going to school to earn a degree and doing a good job raising her children, the court agreed that she no longer needed a guardian.  The client now has a new apartment and will be in charge of her own money.

She said yes to the dress, but her guardian said no

EFE represented a woman with mental illness who is also deaf and has mild cerebral palsy.  Her brother became her guardian after her mother died, and he treated her in a demeaning manner.  The client wanted to marry her longtime boyfriend, but the brother opposed. The court granted EFE’s petition to end his guardianship, which allowed the client to proceed with her wedding plans.

Guardians out; financial control in

EFE represented a man with a traumatic brain injury whose guardians had been mistreating and financially exploiting him.  EFE uncovered damaging information about the guardians and filed a motion in court. As a result, the guardians gave up their role, allowing our client to be free from mistreatment and to regain control of his finances.

Mom spent benefit checks on herself

EFE represented a man who is deaf and has schizophrenia. When he was 18, his mother was appointed guardian and representative payee.  After our client moved into supported housing, his mother did not provide enough money for food and clothing because she was spending his benefits checks on herself.  EFE had the checks sent to the client’s sister. We also filed a petition to end the guardianship because the client was living independently.  Because of that and the financial impropriety, the court removed the mother as guardian and ordered her to open her bank accounts for inspection.

Dad had him committed and tried to take the insurance money

EFE represented a man with mental illness who had a fire in his house.  He was set to receive an insurance settlement of $125,000.  The client’s father manipulated him into designating him as power of attorney and then tried to take the $125,000 settlement.  After a confrontation with the client, the father had him committed to a psychiatric hospital.  While the client was in the hospital, the father sought to have a sister appointed as the temporary guardian.  EFE convinced the court that the client’s sister was not a suitable guardian. The court appointed a public guardian to sell off the property, resolving a host of debts and ensuring that the client obtained his portion of any remaining money.  After a hearing the court dismissed the guardianship case.  Our client left the hospital and received about $125,000 from his closed estate.

A guardian who wasn’t really a guardian

EFE helped a woman with epilepsy who lived in a nursing home.  She wanted to live in the community, but her alleged guardian would not let her leave.  The caller wanted EFE to help remove the guardianship so she could move.  EFE’s research revealed that the person claiming to be her guardian was not her guardian and had no legal right to keep her from moving.  EFE provided the woman with this information and referred her to the community reintegration program to proceed with her goal to move into the community.