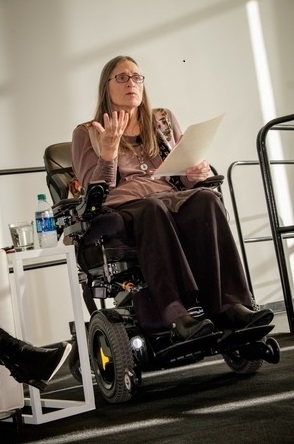 Twenty percent of Americans say they are living with a disability. But at nonprofits, people with disabilities account for maybe 2 percent of board members. Experts say that’s a generous guess, and a figure that needs bolstering.

“The same people get asked over and over—me and Karen Tamley, commissioner of the Mayor’s Office of People with Disabilities,” said Marca Bristo. In 1977, Bristo broke her neck, and the accident left her paralyzed. “It was day and night, what I could do before and after,” she said. In 1979, she founded Access Living, which helps Chicagoans with disabilities live a full life.

Sixty percent of its board members are people with disabilities, a balance Bristo said she’s easily maintained over the past four decades. “These people are significant contributors,” she said. “If a nonprofit wants to do it, it’s not difficult to do.” She herself is on the board of Chicago-based Forefront, Rush University Medical Center and the U.S. International Council on Disabilities, based in Washington.

Bristo said a disability can encompass anything from using a wheelchair to wearing hearing aids. What’s tricky are invisible disabilities—mental illnesses such as depression and addiction among them—that many people have but are not likely to share with others. Sometimes simply posing the question—do you have a disability?—can do the trick, said Erick Allen, head of Access Living’s new Disability Inclusion Institute, designed to train businesses to recruit and employ people with disabilities. The institute’s first formal event is scheduled for March 30.

As the population ages, more people might well identify as living with a disability. “It’s the only minority group anyone can join at any time,” said Emily Harris, executive director of ADA25 Advancing Leadership. That group, housed at Chicago Community Trust, is an outgrowth of ADA25 Chicago, a 2015 citywide initiative that marked the 25th anniversary of the Americans with Disabilities Act.

ADA25 Advancing Leadership hosts a fellow class of emerging leaders, inviting people with disabilities who have five to 10 years of leadership experience to participate in a retreat. So far, it has identified 66 such people. Last year, the organization helped appoint 29 of the 66 to nonprofit and public-sector task force boards, Harris said. Allen at Access Living, who has a vision disability, is one of the placements.

“It’s an untapped talent pool,” Harris said of people with disabilities. Any kind of diversity, she said, helps bring a variety of perspective “that helps you serve your population, helps you be more creative and innovative.”

Harris, who uses a hearing aid, is on the board of Access Living and on the Leadership Fellows Association for Leadership Greater Chicago. At both organizations, she has advocated for widespread use of microphones during speeches, even when speakers might think they don’t need amplification. “I try to educate people that while they might not need it, I do,” Harris said.

Here’s their advice to nonprofits for identifying and recruiting new board members who are disabled.

*Create a disability-friendly culture. For instance, on event invitations, include information on how to request accommodations. Ensure gatherings are accessible, which complies with the Americans with Disabilities Act and also says welcome to people with disabilities.

*Get connected. Access Living and ADA25 Advancing Leadership are two starting points, as are advisory boards. For instance, the Chicago Transit Authority has an ADA advisory board.

*Make your website accessible to people with vision disabilities or low vision.

“Given what’s going on in our city and state, it is imperative that we truly be inclusive, and not just from an optics standpoint,” said Eric Weinheimer, CEO of Forefront. Forefront’s 24-person board includes only one person with disabilities, and that’s Marca Bristo. “We need to be much more thoughtful and deliberate about that,” Weinheimer said.